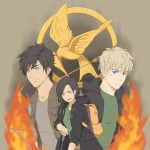 The School For Good And Evil Edit

Voltron: Legendary Defender (will probs be changed bc im only on season 2) Edit

These are just a few of my best friends on the wiki:

Evy is my best friend outside the wiki. She went to my old school and has read all the books I have. She is a Sodex shipper and created the famous Keefabeth.

Crystal is my best FANDOM friend (BFF) and she makes the greatest fanfic's! And, of course, she's one of the rare Sophitz shippers left.

Veeeeee! She may have killed my Fitzy in The Conjurer, but she's really a nice, crazy and amazing person!

Via is one of the first Fitzphie shippers I met on the wiki. She is amazing!

Maddie: aka Maddie the daughter of Athena

Preston: aka Bananazilla the Telepath

Banana, like everyone else, is sooo good at coding! He also is insanely nice.

Rida is sooooo gooood and writing and rping and coding and ligit everything else.

My Inside Jokes Edit

You wont get any of these but whatever:

Retrieved from "https://fun-fandom-kotlc.fandom.com/wiki/User:Betsyfrancisdamesmer?oldid=116450"
Community content is available under CC-BY-SA unless otherwise noted.