Unite, by Crystal and SuldreenSong 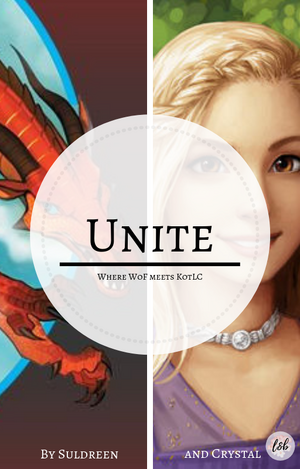 In the land of Phyrria, there was a school of dragons. Everything was going well, in till several dragons found a way to Eternalia. The Elves found them and captured them. With a shapeshifting dragon, and a whole winglet, will they find their way out? Or will they all be forced to have riders? Find out in the story!

Krill studied his talons, shimmering and glistening as much as his mother's gems. He dipped them once again in the dye, shaking his claws gently over his animal companion's head, splashing it every so precisely to get the exactly right hue of silver, on the tips of its head-fur.

He had been inspired by another scavenger, who he had saw right before it had got away with the early night. The darkness, despite his night vision had pressed through Krill's line of sight. He shook his head thinking about it. He didn't have time to dwell on such an anomaly. It was his last day before he went back to school. A intertribal school.

He was specifically interested in the new class that focused on Scavenger behavior. His head turned subconsciously, leaning toward the scavenger whose complexion looked fairly similar to the one from before. It actually looked fairly content sitting right next to a dragon. Almost like she was used to it. He shrugged turning back to dip his claws in the dye once again, but as soon as he looked away, his vision faded, and he wobbled around to get his balance. There wasn't darkness in his life. Ever. And now a tsunami of it seemed to take control as he fainted seeing only scavengers before his vision completely blacked out.

Mindbreaker hid in the shadows of Jade Mountain. Watching the teachers get ready to have the rest of the Dragons come. She had been invited to come get used to the place and help out. She slowly walked toward her sleeping cave, where she had all her scrolls. She had been writing down different interesting things, in hope of knowing what her clawmates and the other students would be like.

Mindbreaker froze. She knew that voice. It was Hurricane, the Seawing. He also had come early, to make sure there were no threats. He was famous among the Seawings. Everyone loves and respected him.

"I said, hello Mindbreaker. Can you hear me? Or have you gone deaf?" Hurricane asked.

"No, I'm afraid I have not gone deaf. Now, if you'll excuse me, I have to go." If Mindbreaker became friends with him, she would be like a celebrity. Everyone followed Hurricane and his friends. It was creepy. She spread her black wings and lifted off into the sky.

"Wait! Mindbreaker! Come back!" He launched after me, catching up quick.

Mindbreaker took a sharp turn and dive down toward Jade Mountain. Hurricane followed. "Am I really that interesting? Did he suspect something? Does he know what I'm up to?" Mindbreaker thought as she landed gracefully on the ground.

"Yeah, well, it's awfully boring around here. So, you're my only hope, Mino!" He said, cheerfully.

"Don't call me Mino!" She grumbled.

"Oh? Then what should I call you? Ferocious Nightwing? Frightening Star? The Claw of Doom? Or I could go with The Great and Powerful, Disembodied Voice from above?" He grinned at her annoyance.

"Hey Hurricane? Why are you with her?" A voice called.

it was to late to stay away from his fans. For they were swooping down toward us.

"Why hello, friends! This is my friend, Mino!" He gestured toward the empty spot she had been. All that was there, was a tiny ladybug, scurrying away.

Once out of sight, Mindbreaker shapeshifted back into the Nightwing Dragon she had been. She then launched herself into the sky, hoping to find some peace.

Retrieved from "https://fun-fandom-kotlc.fandom.com/wiki/Unite?oldid=124527"
Community content is available under CC-BY-SA unless otherwise noted.