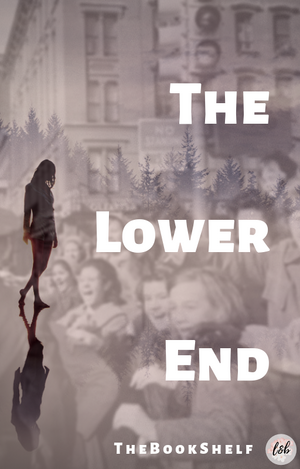 Foxfire and its prestigious students all have money.

I was born wealthy, the wealthiest, in fact. I was part of the Nobility.

I fell into a spiral, one I couldn't get out of. It was too hard.

We are the lower end.

From the amazing writer, Luna, another elven problem is brought to concern.

I keep my head down and twist through the winding halls. My locker was littered with Mallowmelt crusts, and my heart was shattered into a million little pieces.

I had no friends. None. No home. None.

I was the Lower End. The crying end. The weak and poor little chicken end. The trash end.

"Hey, Paris!" One kid, sewn into the crowd, splattered hues of Jamaican Coast blue of the Level 5 uniforms, seemed to call. My neighbor.

I keep my head down. I hope he knows my attention is elsewhere. Every time.

"Paris!" He repeatedly calls my name. I feel a tear slip into the depths of my thrift-shop binder. And another one. They cascade down my face.

I shouldn't be so weak. I'm not this weak. In fact, everyone used to be scared of me.

A stab of pain hits my back. I wince in pain.

And somehow, I snap.

Tangled emotions, buried deep in my ribs, seem to let go of the sadness they were bound with. They flow through my body, lighting my grey eyes on fire. They spark my fire, they pour gasoline on my flames.

Kids scramble back. I chuckle. Watery-blue uniforms won't protect you from fire. People hail mentors from their fancy encrusted Imparters.

"Don't mess with me," I growl. The fire bursts from my hands, brushing the hair of the kids in the crowd. Wouldn't matter. It's all plastic anyways. I feel my eyes burn from the unshed tears.

After all these years, people still want to bully me into submission, still want to threaten me with death because I'm too poor to handle it.

They don't mess with me.

I trudge through the tangled whispers to Magnate Aurora’s office, after being called for the tenth time. I know, stereotypical. But trust me, this visit won’t be forgotten.

She’ll regret ever meeting me.

I’m fueling my own death, I know. People will come after me to kill the very foundation of my existence. They’ll ban me to the Forbidden Cities.

Honestly, let’s just say this was part of the plan. My life has always been unpredictable, and this is just another minor setback to me stealing a Councillor’s circlet and winding my way up to their position.

People may want to harm me, but it’ll be too much for them to handle. They’ll shatter at the glimpse of pain in their minds.

I, being a Pyrokinetic, can hear, think and do as much pain as I can.

The chants behind me seem to melt into my mind.

I roll my eyes, and the tears finally release.

Retrieved from "https://fun-fandom-kotlc.fandom.com/wiki/The_Lower_End?oldid=124499"
Community content is available under CC-BY-SA unless otherwise noted.