This Character Belongs To Charlotte 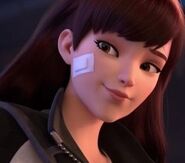 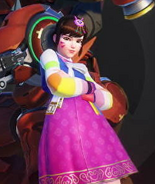 Add a photo to this gallery
Model: Hana Song/D.Va

Mae has dark, reddish-brown hair that falls to just above her waist. She has pale blue eyes and a stern face.

Mae is kind and caring, but any mention of prejudice, vague and subtle or not, the speaker should prepare for some serious backlash. Timid? Not a word to describe Mae. Quiet? Nope. She's loud and clear with her opinions and makes sure that everyone is heard. But she's not rude about it -- at least not always -- because she's always making sure that she's listening to others' thoughts as well. Though she always loves a debate.

Nayamae -- "Mae" -- Taikasha is a normal seventeen-year-old girl. She went to Foxfire up until Level Six, but unfortunately was forced to drop out and after an unfortunate accident was banished to Exillium. Most people think she's normal, to the extent possible due to being homeschooled instead of going to the Elite Levels for the last of her teenage years. But nope, she is not. First of all, she's an unregistered pyrokinetic, to just say it like it is, and second of all, she's lesbian.

After she manifested in Level Two, she'd took Ability Detecting until the end of Level Six, protecting the knowledge of her ability from spreading at all costs. Few people know, so she simply goes by Talentless. When she first figured it out, it was during Ability Detecting. The class had been shoved in a freezer, as they were constantly because the teacher was always making sure that there weren't any Pyrokinetics. Mae's Ability Detecting teacher wasn't her favorite, but she dealt with it. He had some biases for certain abilities, for example, he favored "invasive" abilities such as Telepathy and Empathy over elemental ones, but Mae dealt with it well, and as did the rest of the class.

Also when Mae was in Level Two, she discovered that she preferred girls to boys. She'd known that it was normal in the Elvin world at the time, but it was still hard for her. After being the first to discover her sexuality in her friend group, it wasn't normal to know that, either. And since it wasn't exactly the status quo, she was always the different one. The only lesbian.

Both of her parents are nobles, so she grew up in the higher class. Her mother, Haira Taikasha, where she got her last name from, is an Emissary, relatively close to the Council, taking part in highly classified operations the Mae almost never heard about. Her father, Rayel Taikasha is also an Emissary, but one of the lower positions. Mae is an only child, for her parents were for a time solid believers in all of the Elves' stupid prejudices (hence, only one child), but eventually got over them.

Mae is an extremely good debater; she's been at it and practicing since she said her first word. But that has some consequences. For instance, she's not very good at not picking a "fight", so her life goals are mostly centered on picking and choosing her battles to fight. The pros of debate include a wide vocabulary and a helpful addition to that is her photographic memory.

Lots of people think that she's mean and self-centered when they first meet her, but if they grow to know her, they'll realize her soft inside.


Credit to Sofia for the general layout, Emma for header and sections, Elsa for the gallery, and Bach for infobox.
Retrieved from "https://fun-fandom-kotlc.fandom.com/wiki/Template:MaeRP?oldid=117147"
Community content is available under CC-BY-SA unless otherwise noted.
FandomShop DC Trivia GalaxyQuest