DISCLAIMER; There may be descriptions of blood and some insane elves.

-Our World Is Shamed-

Called the tragedy of the past by some, a disaster by others. They can't even comprehend what we are now.

We've grown. We've fought. Some of us have become murderers. 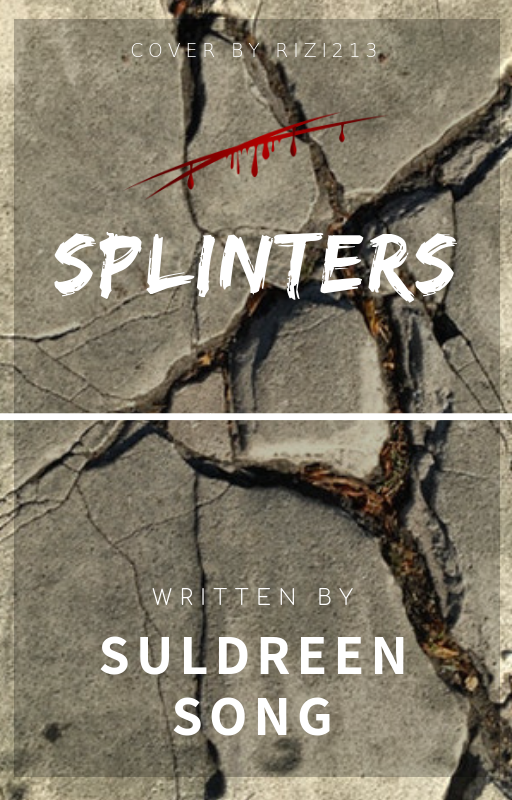 Each bottle shatters, its jagged pieces falling onto the floor. Their points appear especially sharp with the lighting reflecting off of them from the balefire. I push my way through the crowd, shoving in order to reach the admission stand. A man stands there, his nose slightly crooked, his eyes black, wincing as he looks at me with suspicion.

"You're a contestant?" He grumbles, skeptically. His brow shoots up, "You have the fifty lusters? We don't have time here for jokes."

I'm careful to avoid taking out my cube--You know cube theft these days--reaching deep into my elbow pocket, drawing out the cash careful to not go a fraction over. Not that I have enough that I could've. The man snatches the money, counting it twice before gesturing me towards a corner where some other contestants are drinking fizzleberry wine.

I make my way towards them, distancing myself enough to make sure nothing troublesome happens, but also close enough to seem like I belong to a group. A boy looking about my age laughs, "Huh, and I thought the contestants here couldn't get any weirder." His piercing cobalt eyes study me as if trying to figure me out. I got that reaction a lot though. I could understand why. He opens his mouth as if to speak again, before being shoved out of the way by girl with rainbow streaks running through her hair.

She scoffs. "Can you play?" She questions eyeing me. Electricity zaps between her fingers, zapping a bug flying in the air sending it to it's doom. No one flinches. Maybe it's our natural instinct, but apparently those above collapse in pain at the thought of that. I have no doubt she wouldn't kill one of us just as easily.

"Do you think this is a game?" I question. I take a moment looking at her. She examined her nails that were painted a bold aqua that seemed to have hints of red under them. "You know I wouldn't be here if I didn't."

She nods at me, holding her hand out, "Lyasa. You can call me Lyasa." I take her hand, and she twists mine, a pain shooting up my wrist. A scratch is left, with a drop of blood dripping out of the little wound. Her nails drip and a new coat is underneath them. Her eyes widen in thirst for bloodshed. Completely desensitized? Likely. My hand jerks back slightly as her hand goes down by her side. It was only a fraction, but nobody misses it.

They mistake my piece of sanity--My bit of an avoidance for pain as a weakness.

I might be the only one here with an avoidance of death.

She shoos the rest of the people away, leaving only cobalt eyed one left. She turns back at me her electric blue eyes sparking with energy. "Good luck, NewBlood. You're gonna need it." Her face in that moment leaves an imprint on my memory. And her voice was surprisingly tighter. I stare back at her, not even stifling at her nickname.

A voice cuts through my head, turning me back the other way. My shadow dances behind me stretching of towards the boy. "So, you're a shade," He states as if it's the most normal thing in the world. "And you have brown eyes. Related to the great Sophie Foster, by chance?”

I shake my head. It wasn't his business. "Nope, just some messed up genes, I think. Nothing that interesting." It's taken practice to say every word stable. But by now I may as well be convinced its the truth. But it is nothing.

"Nothing that interesting." He repeats laughing, "Please. We're down here. It's not like there's much more interesting. I'm Mylen by the way. Mylen Vacker." I'm sure something flashes in my eyes. I'm surprised he tosses him name around so carelessly. It probably was not a big deal to him. He was a fool.

"Vacker?" I look in his eyes, that seemed to be smiling just like the rest of his face. "Wasn't your family once celebrities or something?" I can feel my fist clenching slightly. Why did he get thrown in here? How did he get here?

His tone turns different as he replies, "Once..." His voice goes back into its upbeat state, "And you are?" He prompts.

My hand darts into my pocket. A broken addler remains in there and it only covers the bottom half of my face. "No one." I don't growl nor bear my teeth like I've seen some do. There may be no rules, but I have to keep myself in check tonight. I need the money.

"See you in the ring." He pivots slightly, sending a smile that could blind all of Atlantis.

I take one step further. Then another. And then another once again. My feet pull me forward, despite my brain's longing protests, the sane part of me that wants me to walk out of here alive. I quiet it down, stepping a few feet forward. Not backing down, I knew that the money on the line was worth more than my well being. I would be able to sleep at Night, perhaps even away from the ruins.

I drag myself forward towards the arena were my nameless competitor awaits. A smug grin appears on her round face and I long to wipe it off. She already has a bottle levitating above her head. I sigh. For all the challenges I could've gotten it had to be the one with the most casualties. C'mon. I shakily move my own bottle above my head, as the "ref" moves to the center to start the match.

There's no rules to these tournaments, just one objective. Destroy the bottle. In this round we each have our own to protect, keeping it above our head so we feel the pain if we lose. She flashes a confident grin, and the match begins. A shield instantly appears around her bottle. And this is when I hate psionipaths.

15 seconds, thats how long it would take to to unravel the field.

I can do this. My hands fly up almost in instinct, channeling the strength deep from my core, as my mind summons the shadows needed to perish the field.

Her bottle slightly wavers above her head, while she steps back a step, attempting to create another layer of protection. Spasms of light fold between her hands. It was good to see she was one play defensive.

A new plan comes in to my mind, it's risky but in the same way it's perfect. A move no one would expect.

The light in the forcefield is woven on a loom of darkness. I had aimed to pull it apart. Now I'm going to make it collapse on itself.

My own vision goes dark. But then from the shadows, I hear that I won. Blinking to clear my eyes, I look up.

And see a spear of light about to hit my stomach.

This is where it gets dangerous.

This is where I could die.

Retrieved from "https://fun-fandom-kotlc.fandom.com/wiki/Splinters?oldid=124435"
Community content is available under CC-BY-SA unless otherwise noted.