"Radelle is seemingly regular. An elf born in a generic family that has almost nothing visible that distinguishes them from other elves. They have two homes, one in Atlantis—the other in a private meadow. She is in her 7th year of Foxfire. She often appears at family parties, but otherwise is off—somewhere. Outside she appears normal, inside she is a revolutionary."

She was never blind enough to see fantasy. She was never enough in the moment to fully be there. She alway was just there-a decoration to her superiors-noticing so many patterns that she could always predict each next move, with the Elvin world’s lack of unpredictability.

At the age of twelve, she had taken up the human sport of speed chess accessing the human internet (available for research purposes in her estranged multi-spesial studies mentor’s classroom) in her spare time. Even though she had the skill to see fractures in her world, she was a bit shocked when experiencing the wit of her human opponents, with their unpredictability ability. Eventually after climbing to the top of the leaderboard on this forum, with much effort, she started participating in online card games.

As a thirteen year old, close to fourteen year old, she spent most her time in public eye, and was unable to escape study hall or lunch to go to that mentor’s classroom. Within a month, her time for escape was gone, as she plastered fake genuine smiles on her face attending way to many galas on the arms of family members, her parents, kids that had drooling issues that she was forced to go with cause somehow they held status, etc. This year she did not have the same mentor,and on the day after midterms she decided to go back to the room only to see it vacated. Later she found the mentor was fired for illegal activities regarding the use of blue crystals. For a bit she shrugged it off, continuing to use her skills from the past year to play with people, tipping them off guard, or sometimes when an over a hundred year old man tried to ask her out (which happened way too much) she would tear down the family’s name with a few words and a strategy. Most regard her as pleasant and simply polite. She acts as she “should”, constantly retreating to the back of her mind though, where she tucks her consciousness, as her actions run according to program.

No one had paid attention to the fact that she hadn’t manifested yet with some, even her ability mentors, were completely convinced she was a beguiler. It was a complete surprise to most around her when she manifested as a technopath instead. Not to herself though. Personally she had always found patterns in things and code was no different. Just as she was able to play with people, she could speak to gadgets the same way. Her hands remembering the years off speed chess, could construct and deconstruct an imparter in less than two second. She made her own copy of her parents spyball, not registering it. She spent more of this year, creating, destroying, and hacking into gadgets. She also cut down on toying with people choosing to spend a bit to look for the individualism, concluding that while all elves including herself share similar weakness, as a group, and yet individuals while infuriatingly predictable should be swayed by belief not her force through pattern. Later she thought that her speak was not manipulation, but rather just knowledgeable persuasion.

She convinces her private tutor to teach her about the idea of telepathy, as he is a telepath, and finds the area she had retreated to was the area broken elves retreat to as well. (She’s not broken though). He notes that without her help inside her mind, the streams of thought she has are too fast to even pick up a word of and that he is quickly tangled inside. Her mind noticing patterns and analyzing everything was also noted to be run more off emotion, which was not expected. She can seem emotional and dramatic sometimes yet she always has full control of her presentation while having almost no control at all. As her tutor, Benyll was intrigued (feel the need to mention he’s only 79 years old) they spend hours over the course of the year her time spent retreating into tech, her mind, or playing with others is now spent learning techniques to navigate her own mind. A week was lost for her in her subconscious, and while Benyll searches for a way to translate her mind, with its ever growing speed, she figures out not only how to evade telepaths, including enhanced ones (tested at later incident) but divert them, taking in their mental strength, or trap their consciousness, and some portions of her brain are so poisonous it pains the greatest telepaths, as if they were attempting to go through a forcefield with lack of shadows. Benyll noticed her gain in strength, he still couldn’t understand her mind when she let him in—And he asked her on a date. And similar to elvin ways, she said yes. For once she was so focused on a hundred other things that she didn’t see that possibility coming. And she loved that feeling of unpredictability. And she loved being an idiot. Then of course she broke up with him just casually when she realized that he was just a self serving jerk intent on a scientific breakthrough hoping to gain actual trust. He couldn’t keep her on her toes for long.

Tries to clear fog from others’ eyes and her own. Attempts to open up others, to stir up passion. Starts to believe that the pain they as a species are missing makes them have less definition and motivation. Starts attending less events. Tries to verbally teach. Gives group chance. Notices that they’re content in their blind position. Is deciding between leaving them in what she believes to be joyous suffering, or educating them. She also continuously breaks laws that would qualify for a tribunal, using her spyball to observe. She watches the council, and Benyll, and recorded negative evidence against multiple powerful groups. She goes back into competitive gaming field hooking up versions of games to her own VR and makes it to the top of many leaderboards and improves reflexes. In the sixth level of Foxfire she added linguistics and advanced history to her schedule.

Tribunals, she exceeded the record for most personal tribunals, most for minor infractions, after Benyll finally after a year interpreted a memory she showed him of her using her spyball. She knew this would happen soon enough, yet in truth she anticipated it. With her family’s influence she ended up being let off with a warning before being called back the next week for a private tribunal without even her immediate family where she was suspected and questioned for council leaks. Her emotions are not enhanced nor dulled but are simply voided aura that felt as if her senses were pushing back. Over the course of the next tribunals her confidence became more evident as she challenged the ideas of the council. There was talk of banishing her.

She hasn't been heard from in months. After graduating Foxfire, with all advanced classes, even a few with special tutors--She left. Before her tribunals, a lot had thought she would enter the nobility. It's suspected that's still her plan.

For the next months, there was little talk of her. Some had suspected she’s off the council's watch list. Others thought she was off starting something. A few know. She was not beginning a rebellion, she fanning the sparks of revolution. If seen doing suspicious activity please tell the council. Older records (from physician) came to the conclusion that she is not completely sane. Unproven though.

Changes-- Some part of her still likes to be unpredictable in some fashion, though often she is simply mirrors others personalities. In larger groups she simply smiles not taking on a role, unless she has an actual plan at the time. Her mind is conflicted, and while she see faults, so many faults in the world, she finds the blindness both blinding and suffocating. She sees to many patterns and a lack of individualism, and feels she can only find it in herself. Viewing things as groups, she noticing the small things that create difference but doesn't quite acknowledge them.

Eyes: Wears contacts and has been since five years old. Some call the real color of her eyes enchanting. Others called it weird. Was the shades of the universe. Many shades blended together. 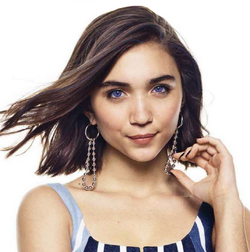 -very hard to read, physically, telepathically, and by empaths...Descryers definitley would get a reading though, shades too.

-wants to be good at making an impact

-wants to unlock potential in elves that she still believes exists

-puts trust (not pure trust though) in others hands easily, hoping to give perspective, and continues to do so even if it inconveniences her a little when they predictably betray her

-Still is not completely comfortable with eye color, and wears ice blue contacts

-Doesn't have enough caution or sometimes not enough bravery

Retrieved from "https://fun-fandom-kotlc.fandom.com/wiki/Radelle_Mir?oldid=127407"
Community content is available under CC-BY-SA unless otherwise noted.