this story is up for grabs 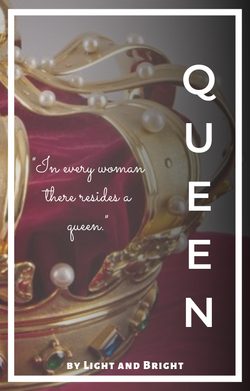 Stuck in a world full of adversity, taking on another challenge was not even an option; but it had to be done. Nobody was going to rein her in anymore.

But just what could a simple human girl do after years of planted discrimination amongst the population? Now this, Rani had no answer to. Neither did she have an answer to why she looked different in comparison to everyone else around her. What she did know, however, was that others shouldn’t have the right to judge her based on it.

With a child who needed her and no alive husband to help with duties, Rani was finding it ever the harder to juggle all the aspects of life. And what made it even harder was something new about herself; something she found hard to comprehend or define, something she herself found hard to explain.

Through this novella by user Light and Bright, follow the path of this young adult to a place one would never imagine; the world of the elves.

The ever imminent danger was pressed upon the crowd in the claustrophobic room; this, they learned, was the cost of rebellion. Knowing one was to perish, and unable to do anything about it because it was not in your hands, and rather, in the hands of an organization the law does not even acknowledge the existence of.

Everyone turned to their leader, but to no avail. Alas, the former queen herself was unable to come up with a solution that would save their skins. Instead, the last hope for the group was being transferred onto a parchment.

As the leader wrote down more words on the parchment, they regretted their decision more and more. And while it may have been for a good cause, there was always their daughter to worry about. What would happen to her in the end? A silent prayer slid out from her lips, hoping for the best.

“All done?” an attendant asked.

“Yes,” said the leader. But still, something just wasn’t right. It was the unsaid line, the line that nobody wanted to be written, but yet had to be.

Eyes watering, the leader wrote down that last sentence.

The last line of the last document they’d ever write.

“Bang!” came a noise from the door. Slowly opening the door, the leader then backed away from the sight.

Through the tears, three figures could be made out from the inky backdrop of the night sky. Each with the patch of an eye.

Everyone in the room knew who these figures were, and yet did not do anything. Frozen in time would be the best description.

They were figures that would fight.

Figures that were despised.

Figures that came to draw blood.

And it was all about that last line. Nothing further.

Waking up to the horrors of reality is something nobody wants to do, and something one often isn't given a choice in. You want to wake up to a nice life, one you are interested in having; one that gives you joy. The only thing that gave Rani any joy at this point was her daughter Esperva, shortened from Espervana. And Esperva wasn’t even hers; she was adopted.

And even with her, there were several highs and lows. No consistency in life. Some love it; some don’t. And then you have Rani. With no opinion, the gray in the black and white mix. She even looked “in-the-middle” as some called it. Daughter of the traitor, they called her.

“Rani,” somebody whispered in her ear, “they want to see you. Les Français.”

Her face visibly contorted, that to the regal posture, one any queen would hold. Carrying her baby in her arms, she walked through the curtains, facing the people of France. This was all she was here for. Show. Eye candy. She wasn’t to say or do a thing. Her regent acted for her. And while the people stood before her, inside, she was utterly drained.

Nobody to be, nothing to do. She was done, but she couldn’t figure out actions where she’d actually be doing someone. She was a puppet. A puppet controlled by the king; someone she wasn’t related to. To be truthful, she wasn’t even supposed to be here. She was the child of the king and an Indian woman from Pondicherry.

So there she stood, taunted by les Français. Her only reason to be there was to be humiliated by the public, though it was tradition for the queen. Even though she was the only woman able to replace the royalty who died in the great battle with les anglais.

Carefully led back inside by her maids, Rani was back to square one. Nothing to do, nobody to see, nobody to talk to. A queen without purpose.

Her maids left her in her room, leaving her privately with Esperva. But something was amiss. It could have been the lighting, the decor, the curtains, but Rani would never come to know until the end. For now, she had been summoned to le banquet royal.

There was nothing new to be seen at the banquet, other than that there was a new guest; one by the name of Fleur Beaumont. There wasn’t really anything new or interesting about her, other than the fact that she had dozens of servants attending to her every move. But even that wasn’t too unordinary; it was a palace of royals after all.

It turned out that she was a suitor for the king, who was a nephew of the previous. The suitor was Dame Beaumont de Bordeaux, an awfully long title. Rani didn’t much care if she was to take her title as queen; she was only suffering because of it.

It wasn’t long before the dame wanted to meet her; after all, she was the current queen. “A pleasure to meet the queen,” she said.

“And it’s a pleasure to meet you, Dame Beaumont.”

“Call me Fleur,” she said. It came as a surprise to Rani; royalty didn’t often subject themselves to informalities such as first names; surnames were the general norm.

Nonetheless, Rani motioned for her to a seat at one end of the long table, as was custom. Rani then chose to sit next to her, hoping she could at least engage in some sort of meaningful conversation; Fleur definitely seemed the type.

But it wasn’t conversation she got; rather a queer collection of expressions from the dame, not a sign of royalty. To add to Rani’s skepticism, there were several instances when the dame would almost eat with her hands, and then, looking at her surroundings, immediately move towards the fork and knife. Her table manners weren’t too refined either; the napkin she had been given was not used in a very ladylike manner.

“I’m sorry for any inconveniences Dame Beaumont may have imposed, she’s been rather out of it lately,” one of her attendants whispered to me.

Inconveniences? Imposed? Those seemed rather harsh for what was merely a lack of royal customs. Though it may just seem that way for her, being brought up with her mother’s influence. Nonetheless, she responded with a terse, “It’s fine.”

“You’re sure?” the attendant questioned once more.

“I’m sure,” Rani replied. Fleur may have been rather inadequate in her mannerisms, but Rani still felt an air of exquisiteness about her, something she had to get to the bottom of.

The banquet got over surprisingly fast, much to Rani’s delight. Looking forward to seeing Esperva again, she was in the best mood possible. But as she entered the room, she quickly realized that Esperva wasn’t there. Gone. Missing.

Faintly calling out to her attendants, the authorities of the castle were immediately notified, and the search for the little girl began. Rani was made to rest and relieve herself from the shock, not that she particularly wanted to. But too much physical activity was forbidden for the queen, so she couldn’t.

As she lay on the bed, quivering from the implications of such a situation, she contemplated what could possibly have happened. But the pain was too great. It clouded her mind, engulfing her in her own emotions. In her attempts to calm herself down, she could feel something far greater about this.

A rustle came from under her. Getting up off the bed, she saw a small note, neatly folded into fourths. Slowly unfolding the paper, Rani read the note. It wasn’t very complicated, just your simple one-line sentence you’d pass to your friend in class. But the fact that it didn’t beat about the bush made it all the scarier.

Esperva is dead,
her body on the banks of the Seine.

Tears streaming down Rani’s cheeks, she dared not look at her maids as she handed them the small paper. It was only a few minutes before the maids came back in with the body of Esperva they had found. Cradling the figure, Rani sobbed into the clothing she had last put on the child.

But yet again, something was off. As Rani’s hand moved towards the child’s ears, she noticed that they lacked a piercing. Immediately suspicious, she rubbed the face, and realized that it had a mask on. Below it, another note.

Of course it was from that pesky woman. Running towards the hall where the banquet was, Rani banged her hip against a table’s edge, and hit the ground with a thud, falling unconscious. Behind her was a group of unknown people, though Rani wasn’t to know that. How they got into the castle was revealed much later.

When Rani woke up, she was in a bed, with a nurse by her side. Her hip ached in pain, and her skull throbbed. As soon as the nurse saw her awake, she held some herbs up to her nose to make her sleep once again. And in her dreams, there came strange voices.

And she saw herself being tortured in a cell, puking leftovers from her last meal.

It was quite a sight, really, to see herself dressed in rags in comparison to her daily 15 lbs. gear weighing her down. But the identity of the jailkeeper was unrecognizable; the face in her dreams was blurry.

For the next few weeks in bed, the queen began to have similar dreams; those of her in bad positions and places. She did not know what they meant, nor why she had any recollection of them after waking up.

But what she did know was that she was supposed to have healed in those six weeks. And she didn’t. Those dreams...

Retrieved from "https://fun-fandom-kotlc.fandom.com/wiki/Queen?oldid=124936"
Community content is available under CC-BY-SA unless otherwise noted.