Lucian is a Shade that is in the highest of the upper class. His grandfather was a Councillor who served the Lost Cities for hundreds of years, then retired to get married. His parents were both Emissaries and Lucian was their only child. He lived in Eternalia, the glittering city of jewels only Noble elves could live in. He was the apple of their eyes and his life was picture-perfect. Loving parents, powerful family name, great grades, it seemed like nothing could get better.

Although he was already famous throughout the Lost Cities, he always had this hole in his heart. His friends weren't really his friends. They liked his status, not his personality and humor. They either were told by their parents to hang out with him, or they just wanted to get popular. The kids he really enjoyed spending time with grew distant from him, as he was surrounded by dozens of fake friends that wouldn't shed a single tear if he was gone. He felt lucky and fortunate to be born into this prominent and glorious family, but sometimes, at times when he was all alone, he wanted to be a normal child.

When he was a Level 4, just a week after he manifested as a Shade, his parents filed a Match Fail out of the blue. His father had apparently developed feelings for another elf and decided to leave his wife. Lucian was very close to his father and it deeply hurt him to see his father leave him without any remorse. His mother was ruined and was never the same again. She was more judgemental and strict than she was before. She tried to raise Lucian but abandoned him claiming that she had no son that was a filthy Shade, and that he reminded him too much of his father, also a Shade. His father's betrayal shook and changed Lucian. His happy and confident personality withered, leaving nothing but anger and frustration.

He got adopted by two middle-class couple and lived in Midforest, a house in a beautiful forest. He met a girl called Caroline Baker and was best friends with her. She was a sweet friend and he was one of the very few elves that believed her when she was framed of electrifying an elf to death. When she punished to Exillium he took a huge risk and secretly managed to find the Exillium campus(the location changes every day, I think) and talked to her. They made signals or signs to each other to recognize each other. They spent a good year using that method until Lucian's adoptive parents found out and grounded him. They always disliked Caroline because of her weirdness and despised her when she was framed of murder. They were outraged to see their adoptive son risking his safety to hang out with her and had the Council put him under very close inspection and added a ton of safety measures on his registry pendant(he somehow managed to trick the pendant *shrugs*).

With his best and only friend unable to reach him, he turned even more angry and dark. He met another Shade while wandering in the forest alone at night and he taught Lucian shadowflux. He was a quick learner and absorbed much of the materials the man taught him. The stranger trained his ability for almost every day, but recently he stopped visiting their usual spot. It turned out that the stranger was none other than his biological father, and Lucian stopped coming, still hurt by his father's betrayal. His father had promised him that he'd visit their spot every night, and he could return to the spot when he felt ready to forgive his father.

He was originally a confident and charming elf but after his father left him his personality withered. He turned more shady and rude after that. He's quite reckless and isn't afraid to use his ability in dangerous situations. His grief calmed down after he found out his father was the stranger that trained him his ability, but he isn't sure if he's ready to forgive him. After he was forcefully separated from Caroline he got depressed. Some people think he had a crush on her because he was so attached to the girl.

He has teal-grey blue eyes, and fluffy brown hair. His model is Baekhyun(EXO). 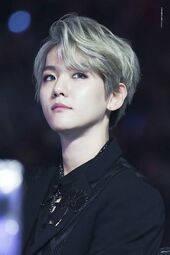 Code by Vee
Retrieved from "https://fun-fandom-kotlc.fandom.com/wiki/Lucian_McCombs?oldid=127417"
Community content is available under CC-BY-SA unless otherwise noted.