London was born into the lowest class, so low no one considered them a class. They were scum, proof the elven world was some form of dystopia. Her parents were gatekeepers and workers at the sanctuary. They made no money. London wasn't able to attend Foxfire, and their home was lent to them from the Council. Everything they had was a loan, a small mistake could lead them to be homeless, or even worse, Exile.

Even though London didn't attend Foxfire, that didn't stop students from stopping by and either throwing her pitying looks or stone-like glares. London spent her days choreographing dances revolving around revenge plans on the Council, negativity brewing in her stomach.

London pictured her future consisting of her rising to the top of every business, owning each and every cranny of the Lost Cities only to realize that a small dance company was the farthest she was going to get.

London's parents tell her, "at least you manifested" as if it's the biggest deal in the world. She was ready to smash everything in her home and shove it in the Council's face when she realized she manifested as a Telepath.

But before she could dig out any revenge plots, she was offered a job in the Council as an Emissary, she tossed her past behind and started a new life.

London is slightly bitter when people talk about her past, or talk about her behind their back, but she could be described as a lemon, sweet as well. She cares about people close to her and likes keeping things organized. She's very kind towards people who need aid or help. 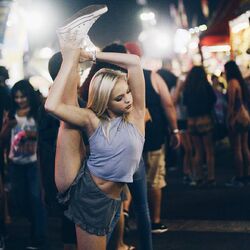 Retrieved from "https://fun-fandom-kotlc.fandom.com/wiki/London_Cresse?oldid=127416"
Community content is available under CC-BY-SA unless otherwise noted.