Some information: This story will start out in Pakistan. However, it will move from place to place.

The amazing cover made by the even amazing-er Rida: 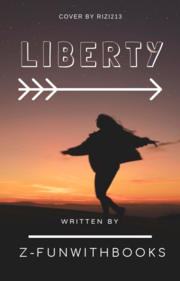 Ammi means mother in Urdu. Aliyah and Khalid live with their mother as their father is dead.

This story is owned by Z the Galaxy

Aliyah was talking to her brother when it happened. Her mother, Leila Hafiz was cooking pakoras in the kitchen when someone knocked down her door. Khalid, Aliyah’s older brother whom she loved very much, turned to her and said, "We should hide. We don’t know who it is.”

"But what if they’re going to hurt Ammi?” Aliyah asked, worry lacing her voice.

Khalid looked at her gravely. "We’ll just have to hope they don’t.”

Aliyah and Khalid hid behind the stairs. They could see several men approach their mom. Their mother was aware of the men just long enough to see them knock her out.

Aliyah gasped, tears running down her face and into her hijab. Unfortunately, this gave away Khalid and Aliyah’s hiding spot. One of the men, who had been on the side, looked at them.

"There are kids over there!” He hollered.

"Show yourselves!” One with blond hair called out.

Reluctantly, Khalid and Aliyah stepped out.

"Did you... kill her?” Aliyah questioned.

"No, we didn’t.” The blond man answered.

"What do you want with us?” Khalid demanded.

"You’re elves. And we’re taking you to the Lost Cities.”

"What on Earth is the Lost Cities?" Aliyah innocently asked the man.

"Yeah, and when did we agree to go with you? Don't forget that you knocked out our mom," Khalid reminded them.

"We thought you might not come willingly. That's why we brought these," The blond man motioned to the gun Aliyah just realized he was holding.

"I'm pretty sure those are-" Aliyah never got to finish her sentence, as she was shot in the head with the mysterious gun looking thing.

"Ouch," was the last thing Aliyah said before she lost consciousness.

Aliyah woke up in a dark cell with Khalid next to her.

"Where are we?" She questioned Khalid. Khalid turned to her.

"We're in this place called the Lost Cities. Apparently, Atlantis and all those other cities are real. Right now, we're being put on trial," Khalid explained.

"Why though? We haven't committed any crimes in our entire lives!"

"Apparently, being the children of the now dead Leila Hafiz and Ahmed Hafiz is a crime itself," Khalid answered.

"Wait, hold on a second. They killed Mom?" Aliayah shrieked.

"Yes. And they made me watch," It now occurred to Aliyah that Khalid was trembling. Aliyah hugged him, and they stayed like that for hours. It was only them now. No mother, no father, not even that one weird cousin.

As if wanting to break their peace, a bulky guard with grey skin approached them.

"Aliyah and Khalid Hafiz," he started. "You are now under trial."

The bodyguard put strange and painful circlets around Khalid and Aliyah's heads.

"Whatever you do," Khalid whispered so the bodyguard with no name wouldn't hear them. "Don't answer any of their questions. If they take our mom away from us, we're going to be as annoying as possible."

Aliyah grinned at that idea.  "Of course Khalid. Being annoying is one of my specialties."

The bodyguard who still had no name stopped them in front of a large door. In five minutes they were on a platform facing twelve elves with jewel-encrusted circlets. Elves sure like their sparkles, Aliyah noted.

"We are the Elvin Council," The spokesman for the Council explained. "Your trial will begin once the other leaders of the other species come. Do you understand?"

Both Aliyah and Khalid remained silent. Then Aliyah spoke, "We understand enough to be able to tell that you're just going to be arguing and not actually doing anything."

This caused a few muffled laughs from the elves (and what looked to be an ogre to Aliyah) in the back who were already here.

"You've got a terrible personality, just like your parents," A Councillor with a peridot circlet snarled.

"I think you don't understand that my personality is who I am, and my attitude depends on who you are," Aliyah replied, not caring of the punishments. This was the person who'd ordered her mother to be killed, right? She deserved every insult she could throw at her. You do not mess with an angry Aliyah Hafiz.

"Before Alina can lose her dignity anymore," interrupted a Councillor with a leg brace. "I suggest that you guys go rest. The other leaders will be here tomorrow. Though Oralie, Bronte and I will stay."

The one with blonde ringlets said,

"My name is Oralie. The grumpy looking Councillor on my right is Bronte. And that's Terik," She pointed to the Councillor with the fake leg.

"Pleasure. Who are those elves and what I presume is an ogre in the back?" Khalid questioned, speaking up for the first time in forever.

As if wanting to introduce themselves they got up and made their way over to where Khalid, Aliyah, and the three Councillors were standing.

"My name is Sophie Foster. And just because I know you're wondering, you're here because your parents stole one of the Councillor's caches. And all the Council, except for these three, believes you have it."

"Okay, cool," Aliyah responded. "Now will someone tell me what the heck a cache is?"

"In short form, a cache is basically a marble filled with some of the Elvin world's most precious secrets," Sophie explained.

"Neat," Khalid said. "The Councillors keep their most important secrets in marbles."

"To open a secret you need a trigger word. And it could be literally ANYTHING," A girl with teal eyes explained.

"Can you guys introduce yourselves?" Aliyah said, picking at her nails.

"Why did the Council kill our mom?" Khalid demanded. It was a simple question, but it made the Councillors turn a little green.

"We didn't want to. But it was a majority vote," Councillor Bronte explained.

"Nice. So why are you guys here? Are you important?"

"We're your defenders. We spent a lot of days trying to find evidence that you don't know where the cache is," Sophie explained.

"Cool. But we were only in Elf-Land for a few hours. How could you have spent days?"

Aliyah and Khalid shook their heads.

"You both were unconscious for days. Two weeks, actually."

Note: Ras malai is a Pakistani dessert. You might want to look it up, as I am horrible at explaining.

"Well, okay then. Can someone please take this incredibly painful circlet thingy of my head? It's making me feel like I want to throw up," Khalid mimcked barfing.

"Unfortunately, we can't. The circlet is monitoring your emotions and actions. Even if you're proven innocent, both of you will have to wear your circlets for life," Councillor Terik explained.

"Well, that makes me feel a whole lot better about this whole trial thing," Aliyah stated.

"When is the trial starting? I'm BORED," Keefe whined.

"You sound like you want the trial to start," Aliyah noted.

"Well, not that I would want anyone to be on trial, but it is kind of entertaining to see the Councillors argue," Biana said.

"I have an idea to make this situation less depressing! Let's get mallowmelt!" Sophie exclaimed.

"First of all, don't talk in sync. It's creepy. And second of all, mallowmelt is only the best dessert ever in the entire world!" Dex explained.

And so, after fifteen years minutes, the Hafiz siblings tried mallowmelt. While they were eating , Aliyah mumbled, "What's the worst that can happen during the trial?"

"I'm assuming that statement was meant to be scary. What's Exile?" Aliyah questioned.

"Elvin prison. But if you get sent there, we'll break you out. After all, we've done it before," Sophie said reassuringly.

"The trial is beginning in five minutes. Everyone, get back to your positions," Councillor Bronte commanded.

And so, Aliyah and Khalid were on the platform again. Aliyah began to tinker a little with the circlet. She always liked to make gadgets when she was in the Forbidden Cities. Just then, hundreds of elves, ogres, trolls, and even some goblins came into the hall. Aliyah gulped nervously. All of these people would be watching her trial? One of the goblin shoulders put something like human handcuffs on Aliyah, thenplaced a pair on Khalid.

Then what looked to be the world leaders came in. After that the Councillors, in all their shininess. Aliyah felt the sudden urge to throw up.

Councillor Emery raised his hands and all fell quiet.

"Name?" He said quietly to Khalid and Aliyah.

"I don't know what that is, and neither does my brother," Aliyah stated.

"And why don't you know that? You're in the Elvin world, after all."

"Because you had people kidnap us from our house," Khalid said. The ironic thing is, he isn't joking, Aliyah thought.

"No, we had people forcibly take you," Councillor Alina said, obviously trying to please the crowd.

"Sounds like kidnapping to me. This trial is a waste of time. They're children, why would they know where the cache is?"

"For once I agree with you," Oralie said.

"Because they're children, and by holding this trial, we're showing the world that we punish children for their parents' crimes!" exclaimed Bronte.

After a few more hours (long enough for Aliyah to learn the Councillors' and other leaders names) of watching the Councillors and the other leaders argue, they came to a decision. Aliyah and Khalid would be able to attend Foxfire (whatever that is) but with their circlets, and their abilities would be triggered next week.

And so, Aliyah manifested as a Technopath, and Khalid a Charger. They lived happy lives with friends for a couple of years, and got Tam back from the Neverseen.

They Lived Happily Ever After...

At least until Khalid died.

Retrieved from "https://fun-fandom-kotlc.fandom.com/wiki/Liberty?oldid=97866"
Community content is available under CC-BY-SA unless otherwise noted.