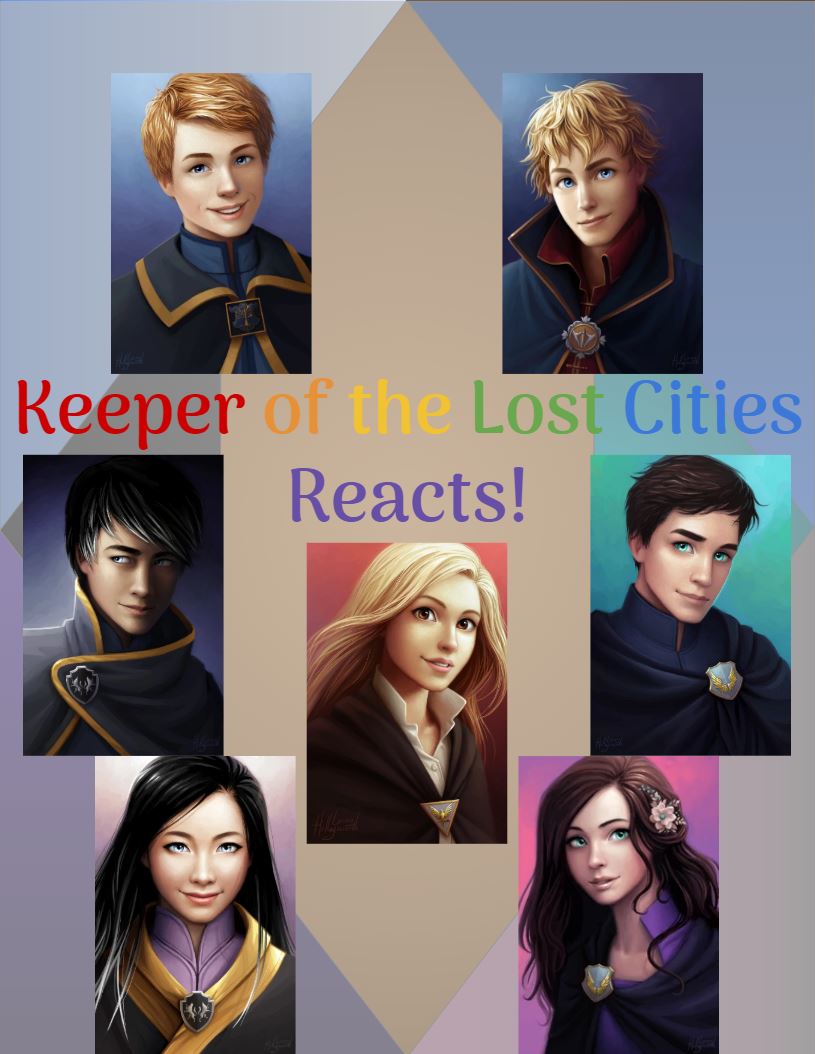 Keeper of The Lost Cities Reacts by me and my friends Lorelei, Vehd, Aqua, Pineapple, and Amethyst. Please suggest what the characters should react to! Thank you, and I hope you like them! Warning: Flashback spoilers!

Disclaimer: The first few chapters were written before Flashback came out.

This is also on fanfiction.net

After the first chapter, once we get one review ish thing, we'll post another. For the second, once we get two, etc.

I am not Shannon Messenger, so I do not own Sophie, Fitz, Biana, Dex, Keefe, Tam, Linh, Sandor, Grizel, Ro, etc. I similarly do not own Lorelei, Vehd, Aqua, Amethyst, KeeperLostCity, Derp, or Pineapple, because they are real people, and they are my co-writers. I will give credit to them at the beginning of each React. The only character that I own is Charlotte, who is myself.  I hope that you, as my readers, can all know and remember that some of these reacts have uncharacteristic parts.

This is not a real book, this is only a Fan Fiction, but please please please do not copy my and my friends’ work. Also, I will most likely post irregularly, because my friends and I all need to approve before the stories go online. You may notice that some of my friends have very  strange names, and that is because they have decided that they would like to stay anonymous. I hope that you can all know that some of these reacts have uncharacteristic parts.

Charlotte O CATS KOTLC, and all my friends!

By: Charlotte, Lorelei, Vehd and Amethyst

Pineapple: I think you should all be pineapple-related things.

Linh: Why would people use my name? Is it okay if my brother can take Tamsong? Because my name is Linh Song, can I have Linhsong? Unless anyone else wants it, of course.

Linh: I am questioning the world right now.

Keefe: It fits him.

Biana: Hm, I either want BianaVacker or MakeupQueen. What do you think?

Sophie: *transmits to Fitz* Why is she so obsessed with makeup?

Fitz: Not sure. It must come from my mom.

Keefe: I call KeefeIsTheAwesomeLordOfEverything! Or maybe Keefe_Is_The_Awesome _Lord_Of_Everything. Wait no! LordKeefe! *keeps mumbling to himself while everyone else ignores him*

Charlotte: Um, I just have to point something out real quick. Can I?

Linh: Sure you can. What is it?

Charlotte: This is the Keeper Crew! I’ve always wanted to meet you guys.

Charlotte, Amethyst, and Aqua: Linh is the BEST!

Linh: *blushes* Thanks, I’d be happy to hang out with you sometime!

Charlotte, Amethyst, and Aqua: *smile as wide as possible* YES!

Dex: Yessss! Someone likes me!

Biana: Omigosh! Maybe without Enhancing, I can make humans invisible! Can I try it on someone?

Biana: *grabs Amethyst’s hand and they both disappear*

Lorelei: Actually, you’re my littlest brother’s favorite, even though he knows nothing about you. Not even about when you went to join the NEVERSEEN!

Lorelei: He literally only chose his favorite picture and it turned out to be you.

Keefe: *murmurs* I wish I was an Inflictor.

Sophie: *puts hand on Keefe’s shoulder* You are one of my favorites!

Everyone other than Sophie and Keefe: *gags*

KeeperLostCity: No. I hate you.

Derp: *flaps arms around, trying to find Biana and Amethyst*

Tam: Wait a moment, how do you know so much about us? What’s my ability?

Charlotte: Shade, and we will tell you in a few reacts.

Fitz: So, what are your usernames? *mumbles to himself* Whatever a username is.

Sophie: *mumbles* What does that mean?

Amethyst’s disembodied voice: BookGirl! But I only use Creative.

Lorelei: Yeah, creative is the best! I think the iPad I use it is one of my brothers' names. Guess who set that one up.

Amethyst’s disembodied voice: I think that was too many hahaha’s.

Biana: You have more than one brother? I’m sorry.

Dex: *sniffs* You were never sorry for me.

Lorelei: So anyway, Minecraft is a building game where you use blocks to, um, build stuff. It’s super simple but really fun.

Amethyst’s disembodied voice: You must not insult Minecraft!

Vehd: Keefe, I will kill you if you if you talk about Minecraft like that.

Amethyst’s disembodied voice: *to Keefe* I think he’s plotting to kill you anyway.

Keefe: Yeah. I got that.

Derp: You know some people play Minecraft for a living.

Dex: I really want to play!

KeeperLostCity: *hands over her tablet* DEX YOU ARE AMAZING!!!!! Can you sign it when you’re done playing?

Dex: *ignores her* Hey, what’s this name above my head?

KeeperLostCity: DON’T BE MEAN TO DEX!!!!!

Dex: Whoa, sorry. I didn’t mean to aggravate you.

Lorelei: You peeps are really way too weird.

Vehd: Never say that or you will face the consequences!!!!!!

Lorelei: I thought you wanted to be weird.

Vehd: Oh, THANK YOU SOOOOOOOO MUCH!!!!

Aqua: We will not be murdering anyone today. *coughs* VEHD!

Pineapple: A pessimist is someone who is more negative than positive.

Amethyst and Biana: *appear across the room*

Sophie: can we actually play now??

Humans: Fine. *give elves spare computers that they had brought with them*

Derp: MINECRAFT IS AWESOME!!!!!!! *to the tune of “Everything is Awesome”* MINECRAFT IS COOL WHEN YOU’RE ACTUALLY GOOD AT IT —

Amethyst: So, we just built Havenfield, and Rimeshire is almost done…

KeeperLostCity: She meant in Minecraft.

Vehd: LOOK WHAT I BUILT!!!! *shows everyone a button* *clicks button* *world explodes*

Linh: But the cute little pig!!

By: Lorelei and Charlotte

Everyone: *stares at the picture*

Lorelei: *in a teachery way* So today we’ll be learning about Mount Rushmore, where four of America’s presidents—

Fitz: Oh! I know these guys!

Biana: Sure you do.

*Everyone but Linh and Fitz falls onto the floor laughing*

Linh: It wasn’t that funny. *Glaring at them*

Linh: Tam is scary when he laughs.

*Fitz leaves before it can get any worse*

KeeperLostCity: Where are Amethyst, Biana, Derp, and Dex?

Lorelei: Derp and Dex decided to go hang out elsewhere for this react, but I’m not sure where Amethyst and Biana are.

Everyone but Keefe: Okay, phew!

Linh: WHAT DID YOU SAY?!?!?! *starts water-bombing Keefe*

Linh: *chases after him*

Aqua: *to Charlotte* Should we go get her?

Charlotte: Yup.*sprints away with Aqua*

Biana and Amethyst: *appear and scare everyone*

Amethyst: Yeah! Us versus you guys!

Sophie and Lorelei: Sure.

Sophie: There are five Elves, sorry, Elves and Humans, so maybe I could Ref? I’m a Telepath.

*the room is deserted*

*Dex and Derp walk in holding a lightsaber*

Dex: Okay, but be careful. *hands it to Derp*

Derp: Where did everyone go? I thought they were reacting to something again today.

Dex and Derp: Eh, who cares.

*Linh, Charlotte and Aqua run in*

Derp: *slashes at the air wildly with lightsaber*

Vehd and Tam: *walk in from healing center* Uhhh…

*Sophie, Biana, KeeperLostCity, Lorelei and Pineapple walk into the room*

Lorelei *totally ignoring lightsaber slashing and water bombs*: Base quest is so cool! I still think it’s crazy that we won.

Biana: With the ‘no abilities’ rule, elves aren’t that different from humans.

Dex: Hey, we should show the humans light leaping!

Everyone except Dex: *stops fighting* Yeah!!!

Everyone: *leaps away* *appears in random meadow somewhere*

KeeperLostCity: Where the heck are we, anyway?

Pineapple: Hey Sophie, can you bring us to Havenfield so we can teleport?

Derp: That would be sooo awesome! Can we? Can we?

Sophie: Sure! *leaps away with humans*

Aqua: OMG!!! I want to see the verminion and Iggy and Verdi and meet Grady and Edaline and… yaaaaayyyy!!!!!!!!

Amethyst: Let’s do that first! *humans agree* Okay, where to first?

Everyone: *is laying down on Sophie’s bed*

KeeperLostCity: Wasn’t there something specific that we came here to do?

Fitz: Oh yeah! We were going to teleport!

Charlotte: *quotes Amy* Do you mean that in a bad way? Because it kind of sounds like you do.

Sophie: That’s funny, my sister said that once.

Sophie: Huh? How would you know that?

Sophie: Okay, let’s go! *pulls them all out the door*

By: Charlotte and Lorelei

Amethyst: Is that a compliment? Because if so: BIANA JUST COMPLIMENTED ME!!!!! *starts fangirling*

KeeperLostCity: Thanks, Biana! That was super cool!

Tam, Charlotte, Linh, and Aqua: *appear holding each other’s hands in a square*

Charlotte: Thanks, Tam and Linh!

Aqua: You have great concentration!

Vehd: *jerks his hand away from Keefe and slaps him in the face* I didn’t even feel you helping me concentrate!

Fitz: *points at Keefe* You have been accused of almost letting Vehd fade!

Charlotte: *tries to poke Vehd but partly goes through him*

Vehd: Hey! *tries to swat Charlotte’s hand away but fails*

Vehd: Why didn’t I get to go with someone else? Anyone is better than Keefe!!!!!

Elwin: I’ve got Fade Fuel. Dex, is it possible to make this work for a Human?

Dex: I think so. *leaps to Rimeshire*

Aqua: Vehd! Are you going to be okay?

Linh: *hits Keefe with water so many times, he flies out of the room*

Pineapple: This is barely the middle.

Ro: *catches Keefe and walks into the room* Um, what is going on?!?

Amethyst: Anyway, when in the world are we actually going to start playing board games?

Biana: I’m not sure, but maybe we could start after Linh is done killing Keefe’s will to do everything.

Keefe: MY WILL TO DO EVERYTHING SHALL NEVER BE DESTROYED!!!!!!

Sophie: Keefe, I thought it couldn’t be destroyed?

Elwin: Vehd has been saved! Thanks, Dex.

Elwin: I put him under sedatives because the Fade Fuel was having problems. He should be fine in an hour or so.

Keefe: *annoyingly accurately mimics her* That sounds fun! I volunteer to play for the rest of the day!

Ro: *whispers* Oh, so this is the guy that burned that other dude’s hand off! Cooooool.

Sophie: Uh, Dad? We’re kind of in the middle of something… *Grady doesn’t stop* Mooooooom!!!

Edaline: *running in* Yes, dear—oh. I see. *pulls Grady away* Oh, and here’s for Keefe if you need it. *conjures a roll of Duct Tape*

Fitz: Keefe, don’t curse in front of the humans!

KeeperLostCity: Wow, you guys are weirder than us.

Amethyst: I DECLARE A WEIRD-OFF!

Fitz: *transmits to Sophie* Is this, like, a normal human thing?

Cabinet: You started to fade-

Cabinet: -then Elwin sedated you because the fade fuel was working strangely. You don’t look faded anymore!

Keefe: I’m not staying here for the anger storm, so… bye! *leaps away*

*everyone plays board games*

Fitz: I wish elves had board games!

Retrieved from "https://fun-fandom-kotlc.fandom.com/wiki/KotLC_Reacts!?oldid=94628"
Community content is available under CC-BY-SA unless otherwise noted.