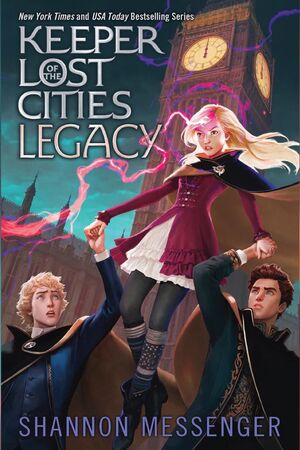 Credit to: Light and Bright

Sophie is wearing a different family crest on the cover, so that may mean that she finally discovers who her parents are. Or it could be the null that Black Swan gave her to stop signals. She holds each boys' hands differently, so that may have something to do with ships (or maybe Shannon's just playing with us as she normally does). They are also in a triangle that could signify the love triangle. If you zoom up it looks like Keefe is holding a necklace or bracelet. Is he giving it to Sophie or vice versa? Also, she is in London and she's trying to find the human that Lady Gisela tries to recruit into the Neverseen that lives in a house with a green door (that was in Keefe's memory). Then they run into trouble (*cough, cough* the Neverseen) on their way (or maybe that's the human or something), and Sophie goes all "Foster Rage" or "Sophie Skill" on them... anyone else think that Sophie's socks have hidden pockets???

Keefe's eyes are a milkier shade of blue than usually described, this may foreshadow blindness. Perhaps something happened (most likely involving the Neverseen) and he was injured somehow?

Looks like I just can't tell, but it looks like Fitz isn't wearing a family crest. Maybe he had one of his 'episodes,' for lack of a better word, and removed himself from them.

It appears that Soph is inflicting, what with the stream of reddish energy from her head. This may show that she has learned to control and localize her inflicting. Who she is inflicting on, there are many possibilities. Alvar, Fintan, Gisela, the list goes on.

Keefe and Fitz have different expressions as they are holding Sophie up. Fitz looks determined, and it appears that he is angry at whoever is ahead. Keefe, on the other hand, looks only at Sophie, and is worried. This portrays just how much he loves Sophie, and how he cares about her safety. Maybe we will get some Sokeefe action this time around!

There is something I would like to bring up that happened 3rd and 5th books. I think it will come back into play in LEGACY. In the third book, Gethen got captured on the Everest Attack. Lady Gisela was tortured for letting him get captured. But then we learn that he was supposed to be in Lumenaria to crash it. So if that was their plan, then why did Gisela get tortured for it? But in Nightfall, when they go to get the Starstone from Dimitar, and he challenges Keefe to a duel, he reveals that that was not the reason she was tortured. When Soph asks what her mission was, he says that it is none of her business. So what was Gisela doing that she failed? Why did it have that consequence? I think that it will come back into play in Legacy. Whatever her mission was, will become very important.

Keefe will recover his memory about the house with the green door, and they are going to go look for the house in London to try and find the human that Lady Gisela sent Keefe to recruit to the Neverseen.

Retrieved from "https://fun-fandom-kotlc.fandom.com/wiki/Forum/Theories/Legacy?oldid=124583"
Community content is available under CC-BY-SA unless otherwise noted.