This Character Belongs To Sophie 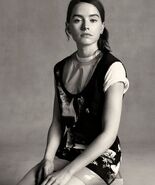 Add a photo to this gallery
Model: Daisy Ridley

Don't let Demelza have anything unless she asks first. She's a little bit of a klepto, though she is actively trying to restrain herself from touching what isn't hers. She just loves using her hands, and quite really, it's the only way she's willing to learn. She has a kind of curiosity that you might find in a child; she wants answers. She wants to know the "what" and the "why" of everything. She's no fancy inventor though, and she's not much of a daydreamer either. She prefers keeping things real, or at least as real as they come. She's occasionally keeping her head in the clouds, though it still manages to remain on her neck, while she is keeping it real.

Marlene Auditore used to be someone to revel with. Used to be. Until she fell from grace with a young Talentless elf. And it'd come to ruin her life, for years to come.

You see, Marlene was the princess of her family. Having grown up among nobility, Marlene enjoyed a lush life, and there were a lot of people who wanted her hand in marriage. It'd never come to be with her desire to become a Councillor though, but Marlene was still playful at heart. A star student through and through, Marlene loved the attention, but she'd never come to realize how much she craves attention. She might have dated a couple elves, but her relationships never lasted, for she was a ride and a half and perhaps a bit difficult to tame at that. A Beguiler by nature, she could silver tongue her way into anything that she wanted. And very little changed when she got elected to Councillor. Marlene received frequent warnings that her behavior would see her removed before she could even say a thing, but she never listened. And that's when things went south for her, very quickly. One unfortunate night, Marlene "persuaded" a young male elf into spending the night with her. Things got close and comfortable... and well, it's a given what happened next. What happened after that night though... oh, it wasn't good at all. Her partner having come to his senses sooner than she did, he was gone before she could even open one eye. And Marlene felt satisfied... but terrible.

Something never seemed right since that night. And the worst was yet to come. Marlene discovered that she was pregnant, and it only became a matter of time before the secret was no more. Marlene was panicking, a lot. If the others even found out, she'd lose her title. What would her family think? Surely they didn't need to know that she might have been irresponsible. But this secret wasn't one that was very easily hidden... as Marlene went further into her pregnancy, it became more and more obvious... until one day, she had been told to not come back in the presence of the Council. She was no longer one of them. To add insult to injury... her family found out too. And proceed to call her irresponsible for her decision. She couldn't take it. Her mind broke as a result of the unbearable guilt she had for herself. Whatever little sanity she had left in her... was purely there so she could stay alive. Surviving the months afterward was absolute torture for Marlene and even when Demelza was born, little changed. Though Marlene managed to find something inside her. Even in her lack of sanity and constant memory loss, Marlene wanted to try.

Demelza did not enjoy the lifestyle that Marlene did long ago, but she was still quite often tended to. Growing up, often in the presence of someone else as her mother wasn't the most stable of people, was quite the rollercoaster for Demelza. Her curiosity as a child overwhelmed her quite often, and at one point, it went further than just curiosity. At the age of nine, her curiosity caused her to manifest... as a Technopath. The weird of things in it all, was that it just came naturally for Demelza. It all made sense somehow. She understood how some gadgets worked. Of course, her manifestation never made sense to anyone, not her mother, not her caregiver, no one. Her mother was a Beguiler... but then again, when extended family comes into play, a couple of Demelza's relatives had this same talent. It still made no sense.

Her technopathy revealed did not smite any interest though. Unlike a lot of other girls at her age, she was figuring out how to improve life, at least for herself. And that gave a broken Marlene some hope that helps her smile even as Marlene grew older. Demelza will be successful, or at least that's what she and her mother believe. Before even starting at Foxfire, she had built her very first little gadget; a set of glasses, with interchangeable lens for whatever Demelza needs. She never did have perfect vision so this was something that would improve her quality of life at least. In time, she'd start schooling at Foxfire, and she wasn't sure whether to look forward to it or not.

Her first couple of years there were smooth enough. She was spared the detail of the Ability Detecting class, very much grateful that she manifested earlier than average. Though, she wasn't quite close with any of her mentors, and she didn't quite have a Technopath trainer. But at least she was making good progress, with her sights set on the Elite Levels. Whether or not she'll get there though, is questionable at best...

Credit to Sofia for the general layout, Emma for header and sections, Elsa for the gallery, and Bach for infobox.
Retrieved from "https://fun-fandom-kotlc.fandom.com/wiki/Demelza_Auditore?oldid=127381"
Community content is available under CC-BY-SA unless otherwise noted.