Start a Wiki
Cypress Carnation
Owned and RPed by Loona

Cypress comes from parents both in Nobility(mother is a Regent and Polyglot/Telepath, father is Emissary and Vanisher) and had a lovely childhood. Her life was picture perfect- she was beautiful in and out with no spots of flaws damaging her image. Her Foxfire grades were all As and she manifested as a Polyglot in Level 2, then Telepath in Level 3. Her parents were both proud and relieved she had manifested a desirable Talent(Telepath). She imagined graduating Foxfire and landing a secure position in Nobility, then settling down with a spouse and two brilliant children of her own. Butttttt fate seemed too jealous of her perfect life to let that happen.

About a month after the beginning of Level 5, tragedy struck and left an everlasting scar in her heart. Her father got severely injured(like, really really really bad) mysteriously while going out on a super-duper-extra private mission assigned by the Council and he was never the same again. Probes searched his mind thoroughly when he wasn't able to explain what happened to him, but they couldn't find anything useful(whoever attacked him washed his mind). The Council refused to acknowledge his death properly and just told the public he severely injured from a nearly-fatal light leap. Cypress, furious at the Council's response, never viewed the Councillors the same way she used to ever again. Cypress's mother was never able to get over her husband's broken state(he's not mind-broken, just can't function like other elves/people), and ultimately abandoned both her family and job, taking off her registry pendant and fleeing somewhere unknown, probably the Forbidden Cities.

Cypress's social image was tarnished and damaged beyond repair and was sent down to the middle-lower class. She was adopted by a Regent couple who already had a son of their own(rumors has it that the Councillors privately promoted them to Emissary if they agreed to take in Cypress into their family). Their son frequently bullied her both at home and at Foxfire but her foster parents never bothered to step in and help her. Despite all of this Cypress never lost her positive attitude towards life, firmly believing that life will get better eventually.

Even till this day, 17 years old, Cypress still and will continue to believe that fate has something better planned for her. She continues to smile brightly even though the world had turned its back against her.

Because hoping for a happier future, is all she can do, for the moment.

She is graceful yet witty, usually very likable and gets along with many elves of any age. Being an ambivert she shows signs of both introvert and extrovert traits. She's very calm and collected, tender yet fierce when threatened. Although logic rules over her most of the times, due to past traumatic events, there are moments when her emotions get the best of her and she may act impulsively and recklessly. She's usually laidback and chill, but can be defiant at times as well(an example is when she strongly insisted on keeping her biological last name instead of taking her new parent's surname). Her MBTI personality type is INFJ-Turbulent.

She has many flaws needed to be fixed but her biggest weakness would be commitment. She's horrible at balancing her lifestyle. She is passionate about many things but her passion could burn out easily within days because she'll mostly exhaust herself after hours of nonstop commitment. She can't keep promises and is indecisive, often seeking other people's opinions to settle her decision. She is terrible at committing herself to relationships. She fails to make long-term friendships with other elves and can't seem to get involved in deep relationships with others because of her fear of commitment. She has a hard time sorting out sincere people from fake ones which lead her to distance herself from everyone as a whole. She longs to find someone who can understand her and comfort her when she's in her lowest mood, whether it be a friend or a significant other.

Katie Leung(Cho Chang), is her model.

Cypress is described to be extremely pretty with long, silky black hair and silvery-blue eyes. She's a tiny bit shorter than an average elf's height(162 cm). She usually has a white Carnation flower over her adoptive family's crest pin, implying she doesn't really belong in her foster family. 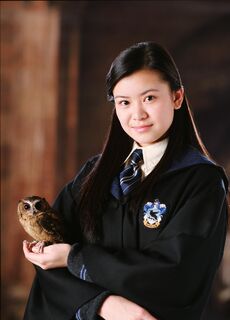 Code by Vee
Retrieved from "https://fun-fandom-kotlc.fandom.com/wiki/Cypress_Carnation?oldid=121088"
Community content is available under CC-BY-SA unless otherwise noted.