Brooklynn had a hard life. At the age of 5, her parents decided caring for a child was not what they wanted to spend their lives on. So they sent her to the orphanage. The Orphanage she was sent to was a cruel place. Everyone hates each other, everyone got into fighta, insulted each other, etc. They even bullied each other. Brook had to learn to be tough, and fast. Because she was small, everyone picked on her. So she learned how to dodge them. She became the hardest kid to bully there. But being at the cruel place made Brook a rude, stubborn, tough, girl.

at the age of 10, someone finally came to adopt her. And after a month, they decided they wanted a sweeter kid. Someone who wasn't rude. So they sent her back. Brook pretended not to care, and continued her life. At the age of 12, Brook had gone through multiple adoptions, only to be sent back. Brook began to lose hope that she'd ever be able to leave the cruel place. So she made the most of it, and taught herself how to dance, and lead. She became the leader for all the kids. No one dared pick on her. Brook began liking her life. No more bullying, only leading, and dancing.

Brook is now 14, and still living at the orphanage. She's a Vanisher. 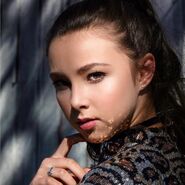 Add a photo to this gallery

Retrieved from "https://fun-fandom-kotlc.fandom.com/wiki/Brooklynn_Flash?oldid=125780"
Community content is available under CC-BY-SA unless otherwise noted.