Fast forward to Ari’s third birthday. She was already a free spirit, insisting on being called Ari, not Ariadne. Her parents disliked this, but knew that she’d gradually grow out of it.

another fast forward (because why not at this point) Ari is entering Level One. Exciting yes? Wrong. Ari’s parent’s were practically drowning her in all their expectations. It was enough to make a kid scream, don’t you think?

Hooray! Another fast forward! Ari’s now in Level Four. She has manifested as a Shafe, something her parents will gladly ignore and pretend Never happened. After all, wouldn’t you rather have a talentless daughter than Shade daughter? Her parents wanted her to register for the match, study harder, (because apparently, getting the highest grades four years in a row is not enough) etc. That’s when Ari finally snapped. She yelled at her parents. She felt bad about it later, yes, but it felt good to get it all out for once.

The night she yelled at her parents was also the worst day of her life. She ended up running away to her cousins and staying there for a bit. She eventually returned home, but nothing was the same with her parents.

Ariadne started becoming more serious. No more goofing off, playing pranks, or even being called Ari. She still let’s people call her that, but it isn’t the same as before. Ariadne is now 16. 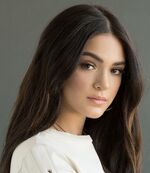 Retrieved from "https://fun-fandom-kotlc.fandom.com/wiki/Ariadne_Rene?oldid=127219"
Community content is available under CC-BY-SA unless otherwise noted.