Aja also wanted a friend, like Skata who had one. Aja had a liking for Sky, but she wanted someone that was her age. Aja realized that Sky had a brother the same age as her. He was a Technopath, and looked like they had the same longing, for a friend. For the first time, things looked like they were going to change, other than her parents said that she couldn't go there, because that Technopath boy, his name was Khai, was in a family who had twins. Khai was a Technopath who hacked and was a talented Technopath. A boy who had his ability triggered at nine. A boy with a mean father and a dead mother. A boy who everyone feared other than Aja. Aja was heartbroken that she couldn’t have the friend she wanted, and saw that the Khai looked at her with longing for her to be his friend too, that the prejudices of this world ruined everything, her parents wanted to protect their own reputation over their daughter's happiness.

Aja's hates when she sees someone sad and she can’t do anything about it. 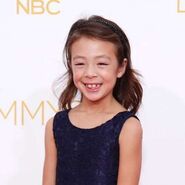 Add a photo to this gallery

Code by Vee
Retrieved from "https://fun-fandom-kotlc.fandom.com/wiki/Aja_Lee?oldid=119343"
Community content is available under CC-BY-SA unless otherwise noted.