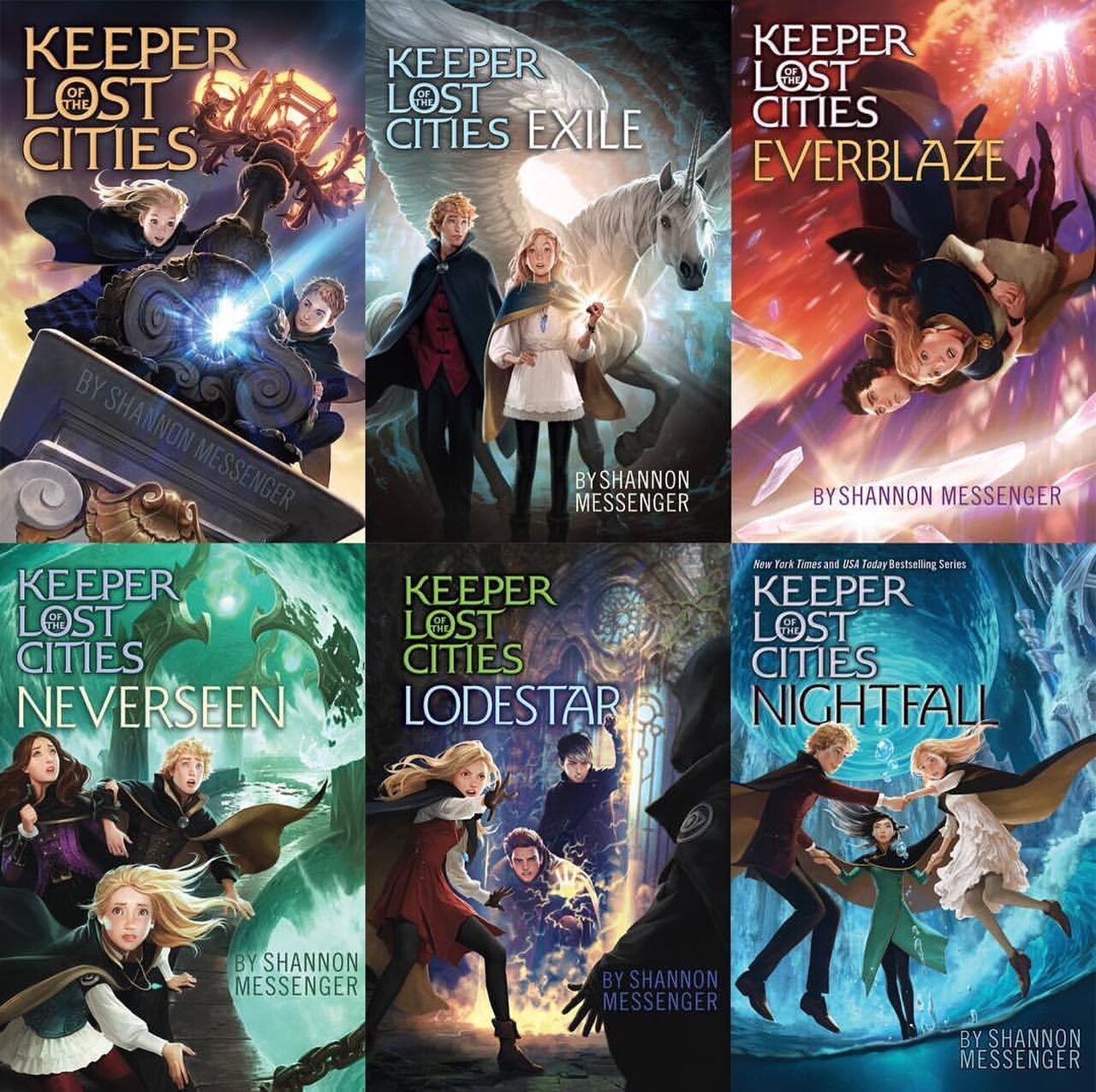 What's on your mind?

*to the tune of YMCA*

There's no need to feel down

Lie there dead on the ground

Cause you are dead now

He's not actually that dead,

But wait he kind of is

HE WAS A GOOD MAN

*sorry this was so cringe but ok*

Ignore the username and call me Abbza

I read the KotLC books a while ago and am rereading some of them. My favorite character is probably either Dex or Keefe.

This is veryyyyy far fetched and veryyyyy unlikely, so i'm not saying I'm certain about this.

I think Caprise Redek was a part of the neverseen, but her mind half-shattered, which was called a brain injury because of the violence that had occurred in front of her(maybe she thought the things the neverseen were doing were too bad?) Then, Neverseen washers erased memories from her mind of being in the neverseen.

She was there when Cyrah Endal was killed by Gisela btw...

Okay, so I already have a lot of theories, so if you haven't please read all of them(including what Jensi is going to manifest as, Sophie's dad, glimmer, and more)

And I just randomly thought that Jurek could be part of the neverseen.

When we first meet him in everblaze, he seemed annoyed at Keefe's dad because Jurek is Talentless, and is always treated as lesser. Maybe he helped put the tracker in Silveny in Neverseen?

Prove me wrong ig if you want.

So y’know Crunchy Ice? Or Concentration?

“Concentration, 64, no repeats, or hesitation”, that one?

Me and a friend are making a KOTLC version, but we need help with something. After Sophie met the Vackers did she meet Elwin or Grady and Edaline first? I we basically just need the whole list of who she met first to who she met last. Only from the first book, though! Don’t want anyone to re-read the whole series for that sole purpose lol.

Who do you ship more: Sophie and Tam or Biana and Tam?

Okay, so we all know and love Dex. We also know that he liked Sophie and it was awkward for a whole six books. We also know that Biana likes Tam. But, she also grabbed Dex's hand in book eight, plus Sophie kinda noticed how they hold hands longer than they needed to. Now, the triplets. Rex, Bex, and Lex are the names of the triplets. I think that maybe each name stands for a ship.

And Rex I'm not so sure about because there are no R names. At least none that I can remember lol. So maybe we will meet an R person in book nine...or sometime after that. So it would be "Rex = Blank and Dex".

Also sorry if someone has already thought of this!!

Hello, I am writing a story and I would like to know if any of you would want to create a picture of a few characters for free. If you would like I would give you the rough draft of the first chapter. I have a certain style in mind so if you wouldn't mind sending me a photo of your work :). If you have any friends that would want to plz pass this on. I would luv to talk w/ u if you would feel comfortable doing this. Comment on this or DM me. I will also be giving you their description and reference pictures. Thank you :) 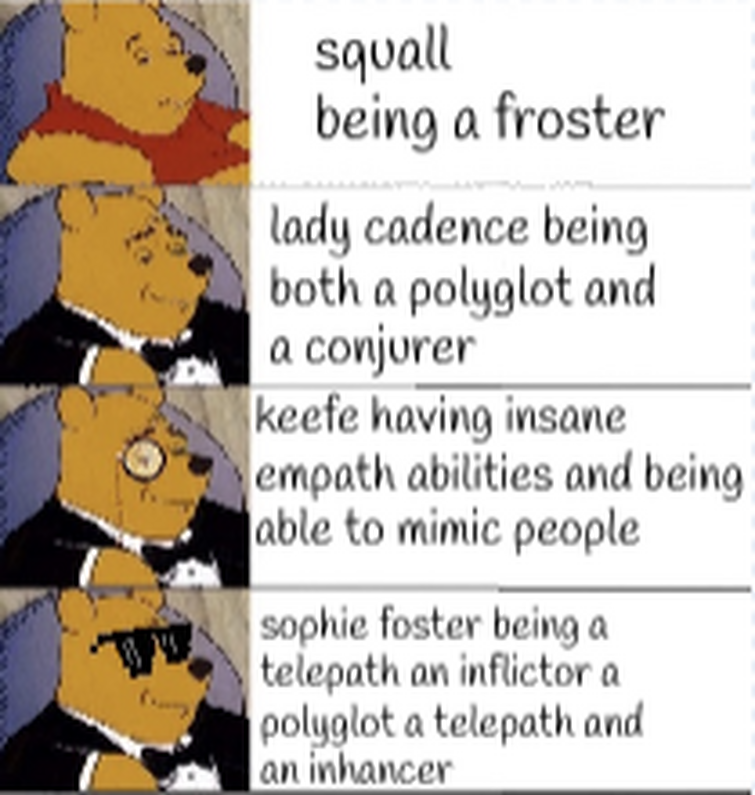 Ok, um... so I was rereading Harry Potter and Keeper of the lost cities at the same time, and I had a dream last night about Fred and George Weasley teaming up with Keefe. They stole the quissetence that Sophie accidentally... I forgot what it was called, like captured? please tell me what it is. but anyways, they grabbed it and made it somehow explode near a bunch of gulon gas which made all of Foxfire evacuate and school had to be cancelled for a whole month. and that was only the beginning. then they went and talked to Fitz sneaking into Biana's makeup to make her look like a clown. After that, they asked Sophie for Iggy and made his burps be heard around all of Havenfield. Then I woke up because of my stupid alarm clock that I forgot to turn off the night before.

(edited by ALDEN IS THE WORST)

*SPOILERS! READ AT YOUR OWN RISK. IF YOU HAVE NOT READ UNLOCK THEN PLEASE KEEP SCROLLING!! YOU HAVE BEEN WARNED!*

Okay, so, on Wattpad I am writing a fanfic and I totally forgot where Sophie is when Keefe leaves the letter. I remember about the storage raid and all that but did they leap from Solreefe to the storage house or from Havenfield? And was Grady waiting the whole time or was he at Havenfield while they went? And even if he was with them then why did he leave? I need answers lol. If you do happen to have a Wattpad account then please PM me, my username is FriendsAreMyFamily

My brain at 3am: mr snorkle

First, think about it- Oralie and him don't talk, they have no connection. Secondly, read chapter 34 of the first book. Just do it. Proof is right there. Thirdly, he literally hates the council yet he came back to them just to mentor a random child(ok, maybe not random, and yes he half did it for Prentice). He cares about Sophie sooooooo much.

This one is far fetched, but I feel if Forkle had a secret twin brother, anything is possible. Glimmer could be....Cyrah endal. Think about it- She was mad and heartbroken because of Prentice's mind break- especially at the council and the black swan for letting that happen to him. She decides to form an alliance with a rising rebel group who hates the black swan and the council. She fakes her death- yes, wylie saw her fading, but SHE'S A FLASHER SHE CAN MANIPULATE LIGHT. Glimmer is also a flasher.

Also- to y'all saying Jolie is Glimmer- Why in the world would she help the neverseen???

3. Lady Gisela has another ability

This one is a maybe, I mean she's a polygot.

4. Jensi's brother is blur, cuz they're both phasers, but this one is pretty obvious.

5. Iggy is a secret FBI spy and is part of the neverseen and that's how they keep tabs on sophie....i'm just kidding don't worry lol

Put more theories in the comments!! I want to see!!!

Keefe: You can't spell 'stupid' without 'i.'